Apa Sherpa Foundation – without education we have no choice

Apa Sherpa doesn’t know how old he is. He says one of his passports says he’s born in 1960, but he doesn’t know for sure. You don’t celebrate birthdays in Nepal. And all the children are named after the weekdays. But, there was something about Apa already when he was a child. He was born with one wish – he wanted to help the people of Nepal. And he knew that to do this he had to become a doctor. His parents saw his conviction and saved all their money, and let Apa go to school to fulfill his dream. Dedicated to reaching his goal he walked 3 hours to and from school, every day from the age of 5.

But at the age of 12 his father died, and he had to take on the responsibility of the family. He had to quit school and start working as a porter to get money to support his family. Soon he became known as one of the most skilled porters, who could carry more than his own body weight up and down the mountain.

Still after all the success and fame, if Apa had gotten the chance to choose between all his success and all his records and becoming a doctor, he would have chosen to get that education and work as a doctor to help the people of Nepal. His wish to do good and improve the life of his people is immense. In 2010 Apa founded the Apa Sherpa Foundation with the help of his best friend Jerry Mika. The Apa Sherpa Foundation works for the children of Nepal’s right to an education. Apa strongly believes that without an education the children of Nepal have no choice – then they have to become porters and risk their lives. The Apa Sherpa Foundation seeks to build on Apa’s legacy by strengthening individuals where they live, beginning in Thame, Nepal, Apa’s home village and expand from there.

Apa Sherpa is one of only two men in history to reach the top of the world 21 times. As the world record holder of the most summits of Everest, Apa is widely recognized to be one of the greatest living mountaineers.

Ironically, summiting Everest was never a goal for Apa. At 12 years of age, he first began working as an expedition porter to earn money following the untimely death of his father. Leaders and trekkers alike immediately noticed the child who, despite his exceedingly small stature, carried loads greater than his own weight with strength, quickness and a wide smile.

Coming from Thame, the hometown of Everest legend Tenzing Norgay, it was almost inevitable that Apa would become a high altitude sherpa on Everest. He began carrying loads on Everest in 1988, but it wasn’t until May 10, 1990, that he reached the summit for the first time along with Rob Hall, Gary Ball, and Peter Hillary.

Since that memorable day, Apa has participated in 22 Everest expeditions and reached the summit 21 times. Adhering to a simple philosophy that “Everest will always be there” and it is more important to keep all team members and sherpas safe, Apa has led his teams to amazing success.

The only year Apa did not participate in Everest expedition was in 1996. Apa was asked to climb with Rob Hall several times as he had climbed with Rob three times in prior years. Apa stayed home to help his wife, Yangjin to build their new house in Thame. Apa was very saddened to learn that many of his close climbers lost their lives including Rob himself during the expedition. That year, fifteen people died trying to reach the summit, making it the deadliest year in Mount Everest’s history.

After officially retiring from climbing in 2011, Apa set another record by covering a distance of 1,700 kilometers on foot with a mission to raise awareness of climate change in the Himalayas in 2012 (The Great Himalayan Trail). Apa and his team completed 20 Himalayan districts from East to West of Nepal in 99 days.

If Apa could have planned his life differently, however, he says that he would gladly have given up the world records for a good education and a career as a medical doctor. That is why education for his own children and for the children of Thame is his top priority.

It is this desire for his children’s education that has brought Apa to the United States. While the decision to leave his homeland was a difficult one, Apa knows that his new home will bring him continued opportunities to pass on all that he has learned from climbing.

In addition to his mountaineering accomplishments, Apa is active in climate change education and the conservation of Mount Everest through many Eco-Everest clean-up expeditions. Eco-Everest removed around 14,000 kg of garbage from the mountain. Also a Climate-for-Life ambassador, Apa Sherpa was the recipient of World Wildlife Foundation’s prestigious “Leaders for a Living Planet” award, and he established a foundation to assist with education projects and schools in the Khumbu Valley. In 2013, he received an honorary doctorate from the University of Utah for his commitment to cultural and ecological conservation of the Himalayas. 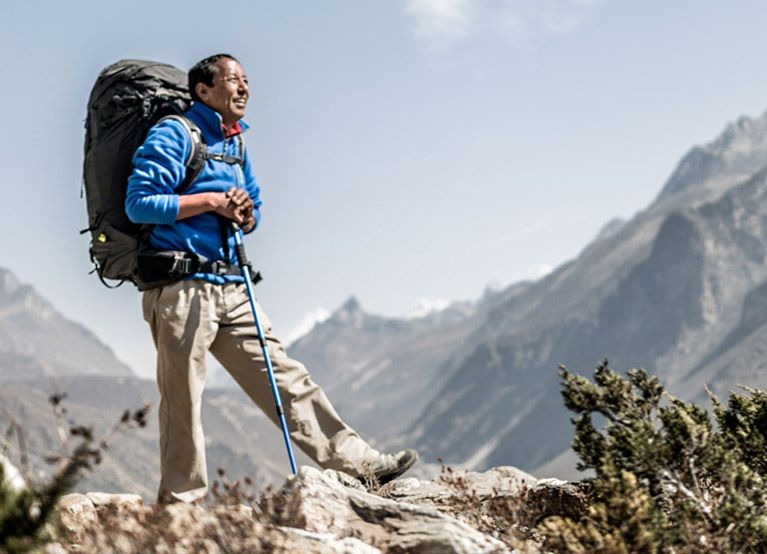