Jenny Rissveds – staying true to herself

Darkness. Cold. Rain. For most of us, these are reasons to bring out the snacks and huddle up in the couch while watching television. Not to Jenny Rissveds. Where we see discomfort, pain and fear, she sees something else: a way to become even better. Despite the fact that she won a gold medal at the Olympic Games in Rio de Janeiro this summer, only 22 years old, she is pushing on. Not necessarily in the pursuit of victories but performance.


– I am not the best I can be. Not yet. Sure, I don’t always feel like riding in harsh conditions, but when I am out there the thought of me doing what others don’t motivates me. I feel it gives me an edge an a mental toughness I will benefit from later. Then my mood rises because I know future competitions will be easier.

The victory in Rio de Janeiro might have come as a surprise to the general public, but not to anyone who knows Jenny or keeps track of the mountain bike circus. Her physical abilities are only surpassed by her iron will and work ethics.

She spends six months with her team in Switzerland and six months at her home in Falun where her family lives. She also spends a lot of time with her brother Joakim who is a mountain bike rider as well. Together they make up the foundation of a life that can be both lonely and taxing.

– I have always looked up to my brother, and as a child I wanted to be just like him. The relationship with him and with my parents has shaped me to my core being. I don’t want to be a person who exploits my success in a bad way – I’d like to keep my feet on the ground. Being a role model is a new situation to me as I struggle to find my way both as a rider and a person. My family is a great support in finding that balance because they see the real me. Now I just have to grow into the part because I’m proud of being recognized.

It is to the woods outside Falun Jenny returns to find peace. Like after the Olympic games, when she felt empty after having accomplished what other athletes spend their entire career trying to do.

– I am not particularly interested in my sport, not in sports in general to be honest, but this is my job so when I have the opportunity to ride through the forest together with my brother with no other reason than having fun, I come back to the things that made me fall in love with mountain biking. It is a chance for me to dwell in the silence and enjoy the nature surrounding me. To me, the forest is freedom and I love spending time there regardless if I’m riding, running or hiking.

It’s easy to believe that Jenny always has had a laser sharp focus on her riding career but it was right after she won a world cup tournament in sprint at the young age of 17 she decided to commit wholeheartedly. By then the pro teams lined up to sign her.

–They say that I’m a talent, that I have an easy time learning and I have been good at things I have tried whether it was soccer or flute. I don’t know if you are born with talent or if it is the result of having the right kind of mindset, but I believe that my achievements are connected to my goals.

Not always an easy task. Her greatest challenge has been her own mind and the fear of failing.

– That is something I have worked on for a long time now and I no longer focus on results but rather on performance. If I after a race feel that I did everything I could and still end up at fourth place, it is still a victory. You cannot be too hard on yourself.

As a young woman in a physically demanding sport, she is often the target of prejudice, especially in countries culturally different from Sweden.

– A lot of people think that mountain biking is not a discipline for women because it requires a toughness they don’t expect to find in women. I love to prove them wrong. You can paint your nails pink and still be a fast runner. Because I have that side too, the side who likes to shop and fix myself up after a day on the bike. I don’t care about other people’s opinions but try to stay true to myself. Somewhere along the line you have to do things for your own sake, otherwise the facade will crack at some point.

Olympic gold winner Jenny Rissveds is a young, dedicated and strong woman who inspires young girls and women not only to be the best in the world but also to be true to themselves and stand up for who they are. You go Jenny! 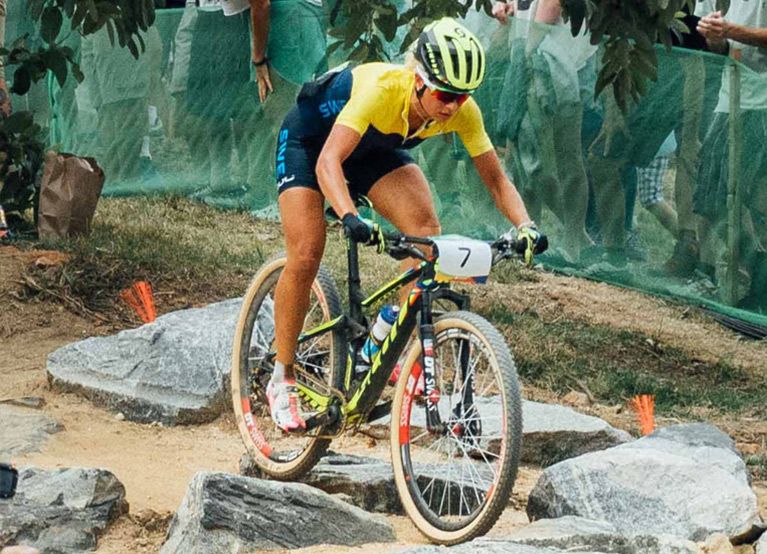 Olympic gold winner Jenny Rissveds is a young, dedicated and strong woman who inspires young girls and women not only to be the best in the world but also to be true to themselves and stand up for who they are. You go Jenny!